How does one get the idea to take photos of fluorescent tubes? I can’t remember exactly what was the decisive factor. It’s just that I’ve always been enthusiastic about technical things. I’m also often interested in history, or, to put it bluntly, “the history of technology and industry”. And if there’s a bit of nostalgia associated with it, I like it all the more.

It is obvious that the colorful light tubes still exist in Karlsruhe, but that they are becoming fewer. Several are already defective and are no longer being repaired. I think it’s a shame that you can’t get one of these. After all, many of the bent glass tubes are small works of art.

So the idea matured to photograph the (still) existing neon tube advertisements and thus create a small document of time. In addition, it is an incentive to photograph such motifs in relatively unfavorable lighting conditions and to push the camera of my smartphone to its limits. As an interesting side effect, I got to know the streets of Karlsruhe from a completely different angle while searching for motifs.

Originally, I just wanted to mention the most beautiful devices in a post on my blog and include the photos. But then I thought that I should give the whole thing a more dignified framework and publish all discovered devices with as much as possible some background information. And so in March 2018 this project website was created under the name “Leuchtröhren in Karlsruhe”. Here there is a separate page for each neon tube device with photos and – if available – further information. Researching them and finding historical data was at least as much fun as taking photos.

When selecting the objects, I had to make delimitations. So no modern installations find place in this project, where the tubes are used as a purely architectural element more or less as lighting. Examples of this are various gas stations or the building of the savings bank at Europaplatz. I have also largely excluded modern, small tubes for indoor use, which are mainly found in shop windows. Such can often be seen in pharmacies in the form of the pharmacy symbols or in stores and bars, for example, with the lettering “OPEN”. Furthermore, in this project I am only interested in the tubes in the so-called “open design”; the tubes are therefore visible.

If there are other light tubes in Karlsruhe that I have overlooked, please feel free to let me know their location!

In June 2019, I changed the – admittedly somewhat bulky – name “Leuchtröhren in Karlsruhe” to “Neonmuseum Karlsruhe”; the address became even simpler: “neonmuseum.de”.

Colloquially, fluorescent tubes are often called neon tubes. In fact, however, neon tubes are only one type of fluorescent tube – and one that started it all. The neon tube was invented around 1909 by the French physicist and businessman Georges Claude. He discovered its mode of operation rather accidentally during his attempts to isolate pure oxygen from the air.

Neon tubes are glass tubes filled with a noble gas or mixture of noble gases. At both ends there are electrodes to which alternating voltage is applied. This is several hundred volts, although the ignition voltage is much higher (maximum 7,500 volts). A transformer or switching power supply is used to generate the ignition and operating voltage.

The different colors of the fluorescent tubes are achieved on the one hand by the gas filled in, and on the other hand by colored glass filters and/or fluorescent dye applied on the inside. The following colors are possible with gases:

In practical applications, however, the colors are usually achieved not by different gas fillings but by different luminescent substances applied internally. These convert the ultraviolet emission of an argon-mercury filling into visible colored light.

This and more information about the technical background can be found on a Wikipedia page. 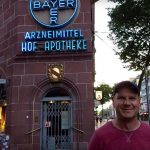 Article about my project on ka-news