On this corner building, on the facade facing Ochsentorstrasse, at the level of the second floor, there is an eagle made of white tubes.

In 1961, the restaurant was reopened. The device probably also dates from this time. The restaurant has been closed since November 1, 2014 and the device is out of service.

A photo from 2005 shows another device (lettering “zum Adler”), which was mounted on the canopy. It consisted of blue or white luminous tubes and was dismantled after the closure of the restaurant.

The device on the facade facing Ochsentorstrasse was removed. 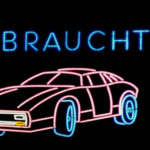